The Moon observed with a 10 inch Cooke in Denmark

The Moon observed with a 10 inch Cooke in Denmark

On February 23rd 1905 V. Neilson at the Urania Observatory using the Thomas Cooke and Sons 10 inch Telescope observed the crater Petavius. He found that in the northern part many rills. In making the observations powers of 328 and 447 were used on the Cooke telescope. 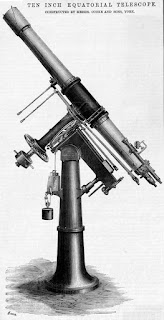 Among the rills was a winding rill that attracted his attention. It came from the most northerly part of the central mountains and reaches in a North Westerly direction as far as the wall at the centre of the crater.