A Cooke in Derbyshire

A Cooke in Derbyshire

Born in Derby on July 23rd 1825 Barber was of independent means but had a great interest in astronomy from the time he was an undergraduate at Cambridge. With Mr J Morgan he published an illustrated account of the Great Aurora of September 24th 1847 as seen from the Cambridge Observatory. He also calculated the ephemerides for the returns of comets.

In 1854 he married Jane With the eldest daughter of the late Rev Matthew With.

They moved to Spondon in Derbyshire in 1864 where he set up his 7.8 inch telescope which as made by Thomas Cooke and Sons of York. I believe he purchased the telescope early in 1864 because from August of 1864 until February 1866 he was purchasing additional equipment for his telescope from Cookes. 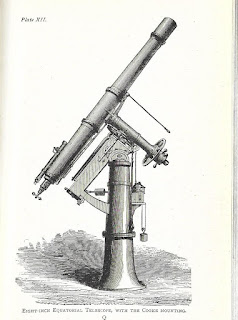 On the 16th April 1865 he observed for the first time that year the unilluminated side of the palnet Venus through the Cooke telescope using a power of 85.

While in Rome he observed an eclipse of the Moon on February 27th 1877, this of course did not require the Cooke telescope.

Barber observed Comet Wells on June 7th 1882 using the Cooke and sons telescope. He saw the comet at 8hours and 30 minutes or less than 10 minutes after sunset. He reported a large white discs but no tail was visible at this time.

Comet Wells was discovered on March 17th 1882 at the Albany Observatory in New York by Mr C S Wells assistant at the observatory.

In 1884 he moved to Aston on Clue in Shropshire where observing conditions were not so good, the telescope was never usd again. Barber died here in 1897.