The Greg Observatory —The Properties’ Committee, after receiving a report on the subject from a subcommittee, had come to the conclusion that the observatory presented the Corporation by Mr. A. Greg should be erected on site in the Williamson Park, and requested the Park Committee to consider the question and report upon it. 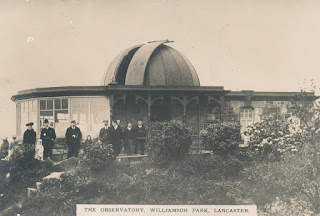 The Greg Observatory, situated in the Williamson Park. Lancaster, was formally opened this afternoon Dr. Copeland, F.R.S.E., F.R.A.S., Astronomer Royal Scotland, after the learned gentleman had delivered address at. the Royal Grammar School. The observatory is named after the donor of the instruments, Mr. Albert Greg J.P .Caton. The instruments were those used by Mr. Greg's father in his private observatory at Escow Bank Caton and were presented to the Corporation of Lancaster about two years ago.

On the consideration of the Observatory Committee, Mr Preston said already between 5,000 and 6,000 people had visited the observatory, but many complained of the terrestrial telescope.—lt was stated that this was really because the glass was too good, and less expensive one had been obtained.