Mr V Cerulli reports his observations made at Terano, Italy using the excellent 15.5 inch Thomas Cooke telescope that had previously been owned by Mr Wiggesworth of Scarborough. There were 11 drawings that were made between 1896 and 1897. 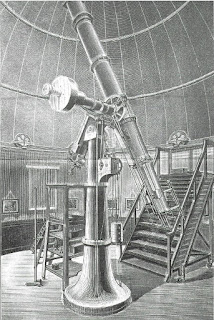 He noted that the lines of Mars did not seem to either increase or decrease in visibility. He says that in July 1896 some of the canals were easily visible on a disc of 7”, while in December 1896 the diameter being 17” they ought to have become more magnificent, but on the contrary they preserved the same appearance as in July.