On December 3rd 1904 Charles Perrine using the 36 inch Crossley reflector at the Lick Observatory in California discovered the 6th moon of Jupiter, Himalia. The moon was named after a nymph on the island of Rhodes and according to Greek mythology she was one of the lovers of Zeus. 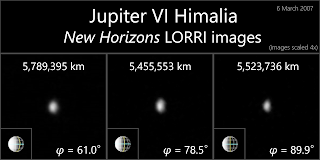 Himalia is the 5th largest moon of Jupiter it has a radius of 85 km and lies at a distance of 11.5 million km for Jupiter and takes 251 Earth days to complete one orbit of Jupiter.