Isaac Roberts and the Andromeda Nebula

Isaac Roberts and the Andromeda Nebula

Born near Denbigh in North Wales in 1829, Isaac Roberts would spend most of his life in the Liverpool area. Although born into a poor family he made his wealth through the building trade which allowed to indulge on his passion for astronomy and in particular astronomical photography. He was a member of the Liverpool Astronomical Society.

Roberts lived in Maghull near Liverpool where he built an observatory which housed a 20 inch reflector and a 7 inch Refractor together with a 5 inch Cooke camera. Isaac Roberts would go on to produce some stunning photographs, in particular there were two lavishly produced star atlases published between 1893 and 1899.

The 20 inch was ordered from Howard Grubb in 1885 but at first there were problems with the instrument, after attention to the telescope it was returned to Roberts in early 1888. 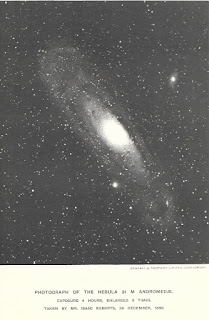 Isaac Roberts decided to leave Maghull in 1890 for the cleaner air of Crowborough in Sussex. He continued his astronomical work from there. Isaac Roberts died here inn 1904.