The new turret clock, presented to the town by Mr. W. Watson, of Spring Lodge, has just been placed in the tower of St. Mary's church by the makers, Messrs. T. Cooke and Sons, Buckingham Works, York. The clock, which is put together on a principle first used by the constructors of this clock, is arranged with a train remontoire and gravity escapement, the special advantage of which is that any amount of weight can be applied to the main clock train to resist the force of wind or friction on the hands, and it will, not affect the escapement in the slightest. The weight of the clock is about two tons. The dials are fixed on the north, south, and west sides of the tower, and are five feet in diameter, painted ultramarine blue, with gilt figures and hands. The clock chimes every quarter. Yesterday, after many years silence, the curfew-bell was again heard, and will be continued according to old custom. 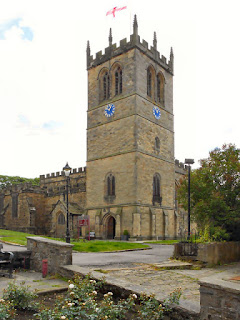 Is it possible that Dominic Cummings wanted to see this splendid example of a Cooke clock?