A noted dwarf variable star in the constellation of Ursa Major the Great Bear which was discovered in 1903. It is a binary system W Ursa Major varies between magnitude 7.7 to 8.5 so it cannot be seen with the naked eye, binoculars are required to see it. The star is the prototype of the W Ursa Majoris type variable stars. W Ursa Major lies at a distance of 169 light years. 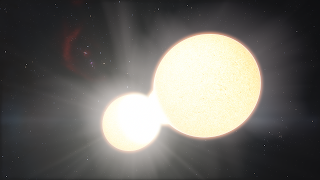 The W Ursa Majoris stars are binary systems which are so close together that they are touching each other. Astronomers call these kind of stars contact binaries. This will ensure that the two stars are not spherical but ellipsoidal or egg shaped. The system takes around 8 hours to orbit each other. W Ursa Major is the brightest of this kind of star.