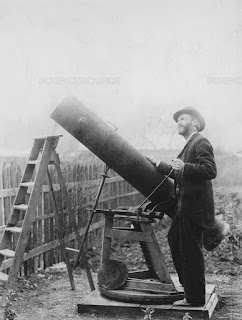 After a nova has been observed and has faded it is usually allocated a variable star designation as in the case of Nova Cygni 1920, it is today usually referred to as V 476 Cygni. It is believed that the star lies at a distance of around 4,000 light years. No photographs of the area have found any stars brighter than magnitude 15 indicating that the star brightened by around 13 magnitudes that is an increase of about 160,000 times within a few days.

A Nova is comprised of a binary system of two stars with one being a white dwarf the other an older larger red star. The white dwarf pulls gas from the red star which then forms a disc of cool gas which then falls onto the hot white dwarf, this then results in a shell of gas being thrown into space. We then see a star appear where none had been seen previously, in the medieval time these were called Nova, which in Latin means new. The stars are not new but we still use the term today.