UV Ceti also known as Luyten 726-8 as well as Gliese 65, is a red dwarf system in the constellation of Cetus the Whale and is of unusual interest. It is the prototype for this class of flare stars. The system was discovered in 1948 by William Jacob Luyten. The system is made up of two stars of magnitude 12.7 and 13.2 which cannot be seen with the naked eye, telescopes are needed to see them. The two stars orbit each other in a period of 26.5 years. 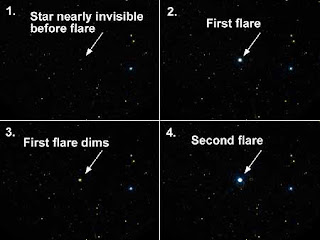 UV Ceti is the 6th closest star to the Sun, lying at a distance of 8.7 light years. The title UV Ceti applies to the fainter member of the system and is sometimes also called ‘Luyten’s Flare Star’. The UV Ceti stars are extreme examples of flare stars they cannot brighten several magnitudes not in days but in minutes and then fade in brightness just as quickly. In 1952 UV Ceti was observed to increase in brightness from magnitude 12.3 to 6.8 in only 20 seconds!