Thuban in the constellation of Draco the Dragon which is formed of a curve of stars that twist around the North Star shines with a magnitude of 3.6. It is one of the fainter stars to have a name allocated to it. This is the result of its position in the sky. Around 4,000 years ago when the great pyramids were being built Thuban was the North Star.

The position of the North Star changes due to a wobbling effect on the Earth. The Earth spins on its axis once a day and takes a year to orbit the Sun but as it travels around the Sun it is wobbling very slightly like a spinning top about to stop. However while a spinning top takes only a second to spin once the Earth takes around 26,000 years to wobble once. This is called precession by astronomers. 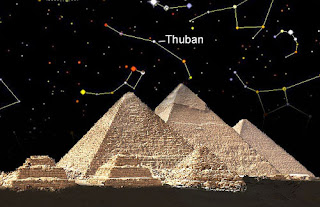 Thuban its name means Serpent lies at a distance of around 300 light years and is an A0 class star which means it is hotter than our Sun. Thuban will be the North Star again around the year 25,300!!

Any Harry Potter fans might recognise Draco as Draco Malfoy one of the characters in the stories. Maybe JK Rowling had an interest in astronomy as a lot of her characters have star names.