Most of the names of the stars we use today are of Arabic origin which is why they can sometimes be a little bit difficult to pronounce and can sound a little different to us. Take Zubenelgenubi which is alpha Libra, its name means the southern claw, originally this star was part of the constellation of Scorpius the Scorpion but around 2,000 years ago when Libra was created it was given a free transfer. 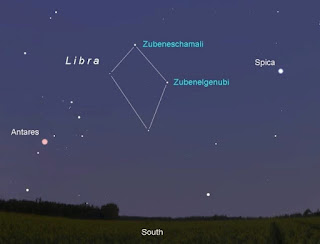 Zubenelgenubi is one of the few naked eye stars that is also a double star. The two stars shinning with magnitudes of 2.7 and 5.1. They take around 1,500 years to orbit each other. The star lies at a distance of about 77 light years.

If people are taken aback with the name of Zubenelgenubi it always worth mentioning that beta Libra is called Zubeneschamali or the northern claw. Again identifying that it was once part of the Scorpion.