Will Hay, Nova Puppis and a Cooke

Will Hay is best remembered as a comedian of the stage and films in the 1930s and 1940s. He was also a very competent astronomer who discovered a white spot on Saturn in 1933 using a 6 inch Cooke telescope. He also observed Nova Puppis 1942 with a Cooke this time a smaller 3.5 inch telescope. 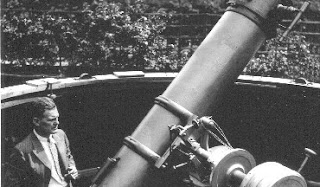 Observing from London early in the morning of November 24th 1942 and using his 3.5 inch Cooke he saw the nova. He had seen it a few days earlier on November 14th as a naked eye object of around magnitude 3.5. By November 24th it had faded and a telescope was needed to see it.

Will Hay was also struck by the red colour of the nova. He checked other stars nearby of about the same brightness and they appeared to be their normal colours suggesting that the redness was in the nova itself.

Nova Puppis was discovered by Bernhard Dawson at the La Plata Observatory in Argentina on November 8th 1942. It reached a maximum magnitude of 0.3 on November 10th 1942.