I know that Cookes started making a small number of steam boats and fishing vessels from 1876 but I was fascinated to come across details of Cooke’s in 1872 offering a small steam launch for sale, it had been newly fitted up and was in perfect order. It was 29 feet long with a beam of 6 feet.

Could this have been the boat that Thomas Cooke used in 1867 to go up and down the river Ouse in this little boat using his steam engine?

Thomas Cooke not only made scientific instruments in York he also built a small number of steam cars in 1866, these he used to visit among other people his brother Barnard who lived in Hull. 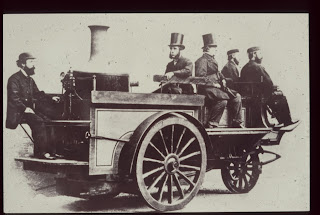 However due the Road Act any vehicle that was not pulled by a horse, i.e. ‘a horseless carriage’ had to have a man with a red flag walk in front of the vehicle. As a man walks at a speed of around 4 miles per hour and Cooke’s steam car travelled at around 15 miles per hour this was clearly a dangerous thing to do.

It is believed Cooke built 4 or possibly 6 of these steam cars, none survive today or at least as far as I know none survive. The picture here is the only one to show one of these steam cars. On being told that the vehicles were illegal Cooke simply put one of his steam engines into a small boat and took it on the river Ouse in York where no one would tell him how fast he could travel.