Occultation of 73 Pisces from India with a Cooke

Occultation of 73 Pisces from India with a Cooke

The occultation of the star 73 Pisces by Jupiter was observed from Meean Meer, Lahore, India on December 23rd 1880 by H Collett using a 4.5 inch Cooke telescope with a power of 96.

At 01 hours, 52 minutes, 30seconds GMT the star was hanging on the limb of the planet and by 01 hour and 54 minutes it had entirely disappeared. The phenomenon strongly resembled the occultation of a satellite except the disappearance was more rapid. The planet and star appeared to cohere for about 1.5 minutes.

A sketch has been included. 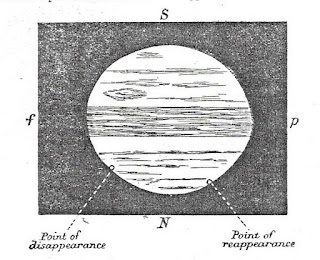 No micrometer was used. The GMT of reappearance was 02 hour, 44 minutes when the star was again observed to hang onto the planet’s limb. The planet was well placed for observation being near the zenith.

Before and after the occultation Jupiter appeared as if with 5 moons, the star being almost indistinguishable from the satellites.

As the occultation could not be observed in Europe these few notes may prove to be of some interest.