Although it appears that the stars stay in one place in the sky and do not move some stars do show tiny amounts of movement. Astronomers had for some time noticed these tiny movements but until 1838 no one had been able to measure them. Then in 1838 the German astronomer Freidrich Bessel observed 61 Cygni in the constellation of Cygnus the Swan. 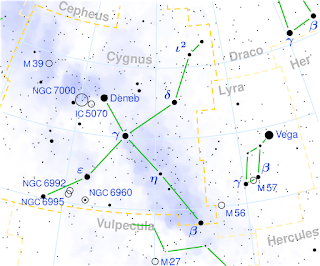 61 Cygni was the first star to have its distance measured by a technique known as the Stellar Parallax or its movement against the background stars. A magnitude 5.2 star which is just visible to the naked eye under the very best of conditions. Bessel measured it distance as 11.4 light years.

Although 61 Cygni appears as a single star astronomers since 1830 has thought that it was a double star. Although there appeared to be confirmation of the double star status it was not until the 1930s that this was confirmed.