Shaula or lambda Scorpii is the star that marks the sting of the scorpion. The name Shaula means the ‘Stinger’ With a magnitude of 1.6 Shaula is the second brightest star in the constellation of the Scorpion. Yet lambda is only the 11th letter of the Greek alphabet. This rather throws the system introduced in 1603 by Bayer on his Uranometria star atlas into some confusion. In theory the 24 brightest stars in a constellation should have a letter from the Greek alphabet allocated to it with alpha being the brightest followed by beta and ending in omega. 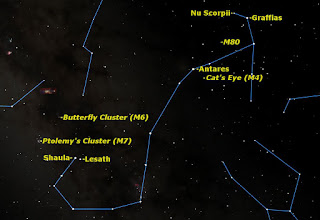 Shaula lies at a distance of around 570 light years. Like many stars it is not a single but a double and possibly a triple star system. Shaula is a B class giant star with a temperature of around 25,000 degrees much hotter than the Sun.

The companion star is believed to be a neutron star the result of a supernova explosion. What ever Shaula’s companion might be astronomers believe that at some point on the future lambda Scorpii will also become a supernova. That really will produce the sting of the tail of the scorpion.