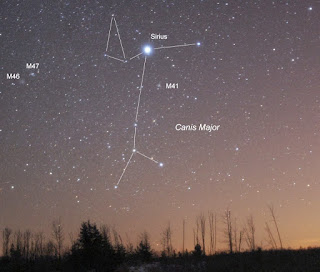 Sirius was very important in ancient Egypt because when it was seen for the first time before the Sun rises was the time that farmers had to put their seeds in the ground ready for the water from the river Nile which would shortly flood their fields. Leaving a cover of very fertile sediment to hopefully produce a good crop for the year. When Sirius was seen just before sunrise this is known as the Heliacal Rising.

The brightness of Sirius is part due to its closeness to us its a mere 8.6 light years away. Being a star with a spectral class of A0 its hotter than our Sun. It is also a binary star. The story behind the discovery of the companion star is fascinating in itself. In 1862 the American telescope maker Alvan Clark was testing a new telescope when he used Sirius to check how good the lens was and discovered Sirius B or as it is usually referred to as ‘The Pup’. 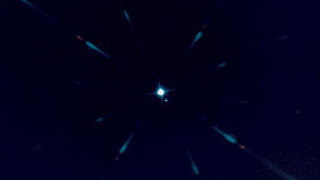 The pup is no ordinary star it was the first of the white dwarf stars to be discovered. Although much fainter than Sirius A the pup is much hotter and much older. It is the remains of a larger companion star. The star is formed of material that has been squashed together this material astronomers refer to as degenerate material, it is so heavy that a lump of white dwarf material the size of a snooker ball would weigh around 70 tons!! The Sun will one day become a white dwarf.