Northerners seem almost vainly proud of their pole star, Polaris in Ursa Minor, as if nature put it there. Southerners they note have no pole star. They mumble grudging that, yes, there is one, though it is no more than the 5.5 magnitude star sigma Octants. Octans the Octant is one of the faint constellations that was added in the southern hemisphere 1750s by the French astronomer Nicolas Louis de Lacaille. 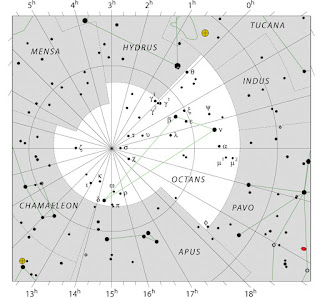 The brightest star in octants is Nu with a magnitude of 3.8, however sigma is the most important star in the constellation due to its location in the sky and since the 1700s sigma has been referred to as ‘Polaris Australis’

Sigma is an F0 class star with a surface temperature of 7,400 degrees making it hotter than our Sun which has a temperature of 5,800 degrees. Sigma lies at a distance of 280 light years. However astronomers in the southern hemisphere can take heart that due to the precession or wobbling of the Earth things are getting better with brighter stars marking the south pole until in the year 9100, the star delta Carina will be the South Pole star. At magnitude 2.0 delta is as bright as Polaris which marks the pole stars today for astronomers in the northern hemisphere.