Many people know of the Cepheid variable stars which are used to work out the distance to clusters and galaxies. The prototype delta Cepheus was discovered by the death astronomer John Goodricke in York in 1784. These cepheids have periods of between a few days up to 50 days. The classical cepheids are normally found along the galactic plane. At the lower end of the scale of these pulsating variables with periods of less than a day astronomers find the RR Lyrae stars.

RR Lyrae was discovered in 1899 Williamina Fleming one of the women computers working at Harvard. RR Lyrae stars are fainter than the classical cepheids having magnitudes between 7.0 and 8.0 below naked eye visibility and are typically found in globular clusters. 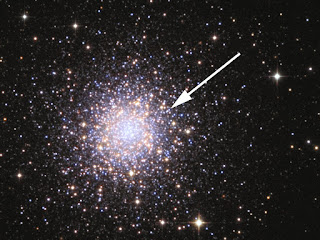 Globular clusters are older than open clusters. Originally referred to as cluster variables RRLyrae stars can be found throughout the Milky Way although around 80% will be found in the globular clusters. The RR Lyrae stars are an additional aid to help astronomers work out distances within out galaxy.

RR Lyrae stars are not only known of in our galaxy but recently using the Hubble Space Telescope astronomers have discovered RR Lyrae stars in globular clusters in the Andromeda Galaxy.