Among the oldest celestial figures known, Hercules was handed down to us by the ancient Greeks though not he brightest star in Hercules Rasalgethi marks the head of Hercules and is therefore allocated the Greek letter alpha. In addition it must have been at its very brightest when Bayer allocated it the letter alpha. Its a red giant star variable star varying between magnitude 2.7 to 4.0 and lying at a distance of around 360 light years. 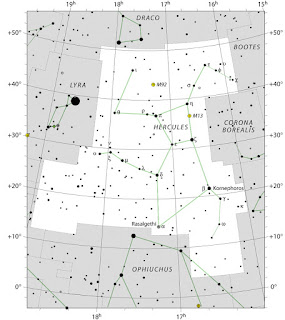 Astronomers have discovered that Rasalgethi is actually a triple star system with a companion yellow giant star with a magnitude of 5.4 and a fainter F dwarf star. Some astronomers describe the brightest stars as a remarkably lovely pair with colours of orange and emerald. The pair take around 3,500 years to orbit each other.