The constellation of Monoceros the Unicorn occupies the area between Orion, Canis Major and Canis Minor in the winter skies, there are very few bright stars in the constellation. It is a ‘modern’ constellation added to the sky in the 17th century. 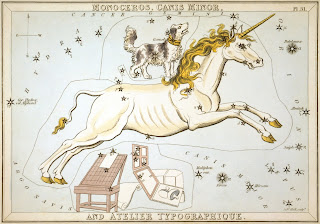 When the great 200 inch Hale telescope became operational in 1947 one of the first photographs taken was of NGC 2261, Hubble’s Variable Nebula in the constellation of Monoceros. In 1916 Edwin Hubble after who the Hubble Space Telescope is named discovered that this fan shaped nebula was uniquely variable. There were large changes in brightness up to 4 magnitudes. In the apex of the nebula was a star R Monocertis which had been observed since 1861. 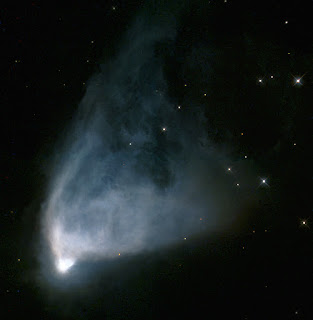 R Mon is surrounded by gas, its magnitude is listed at 11.8 but the gas is so deep that is obscures light from the star by around 15 magnitudes! It is believed that R Mon is a T Tauri type star a star that is in the process of becoming a proper star. It is believed that the disc of gas that surrounds the star is about the same size as our solar system.

R Mon lies at a distance of around 2,600 light years. Astronomers know of many stars that have planets orbiting them, One question that astronomers pose is could there be planets forming here?