Polaris, the North Star, the star of the sailor, guides our way above all others. Polaris lies at the end of the tail of Ursa Minor the small bear or small plough. It appears not to move and it can be seen in the north at an angle above the horizon equal to you latitude. When it stands over your head you are at the North Pole. 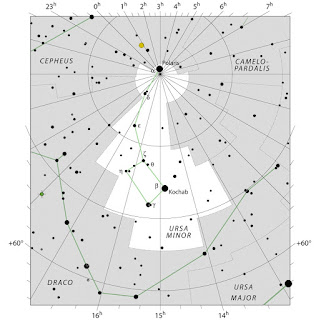 Today we have Polaris in Ursa Minor around 4,000 year ago when the great pyramids were built the north star was Thuban in the constellation of Draco the Dragon while if we project forward about 9,000 years it will be the star Vega in Lyra the Lyre. Vega is one of the stars that mark the summer triangle.

Polaris also has a secret it is or was a variable star, it was suspected as being variable since at least 1852, its variable range was given as 1.8 to 2.1. over a period of 4 days. Polaris was classified as a Cepheid however in more recent times Polars has stopped varying in brightness. Astronomers are not sure what is going on but some suspect that Cepheids have periods in their life when they stop varying and then restart some time later. Polaris could be in this quiet period. All astronomers have got to do is wait for things to start happening again, however this is likely to be longer than the next time Polaris becomes in the North star in 26,000 years time.