With some exceptions we do not see stars evolve from birth to death, the time scales are too long. Instead we look at different kinds of stars and mount them like pearls on a string of theory. Long lifetimes for any state of evolution yield vast numbers of stars, while short lifetimes are few. 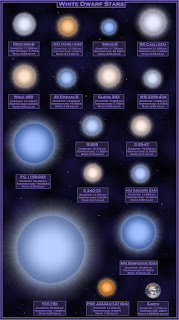 PG 1159-035 in the constellation of Virgo is the prototype of a small group of pre white dwarf stars. It represents the transition phase between a planetary nebula and a white dwarf. In 1979 PG 1159-35 was seen to be varying in brightness between magnitude 7.7 and 9.0 and was given the variable star designation GW Virgo.

At the moment the temperature of the star is a colossal 130,000 degrees but its temperature will start to cool to between 22,000 and 28,000 degrees it will become a real white dwarf. Therefore by studying a small group of stars like PG 1159-045 astronomers are able to see the evolution of a certain kind of star.