This neat and compact observatory of Mr R C Johnson at Bebington, Cheshire was described at the Literary and Philosophical Society of Liverpool on March 18th 1878. It is of two stories the lower one is circular, made of bricks and enables the telescope to be raised above surrounding objects and is utilised as a laboratory or photographic room. The upper equatorial room is of the drum dome form, also circular; all but the lowest foot being a continuation of the wall of the lower room, and is made of timber covered with corrugated zinc. 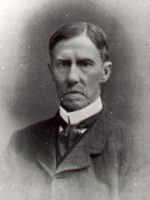 The telescope is an equatorial reflector by Mr John Browning with silvered glass speculum of 9.25 inch diameter. The pier which supports it rises from a firm foundation and is carried through without touching either floors. It is hollow in the centre and open down one side, so that a well ventilated space is allowed for the fall of the weight of the driving clock.

R C Johnson would go onto become a president of the Liverpool Astronomical Society between 1882-1884.