Those who think that the stars are not highly coloured need only look at Mu Cephei the star that William Herschel called the Garnet Star due to its red colour. The star is a M2 supergiant with a temperature of around 3,500 degrees much cooler than our Sun. Mu lies at a distance of about 940 light years although there some doubt as to how accurate that measurement is. 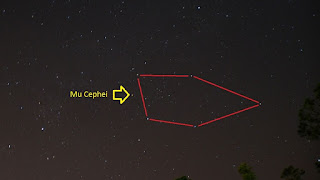 Mu is a variable star it varies between magnitude 3.4 to 5.1 and can be followed by the naked eye if the sky is very clear or more easily by using binoculars. Mu is a semi regular variable star with a period of between 860 to 4,400 days. 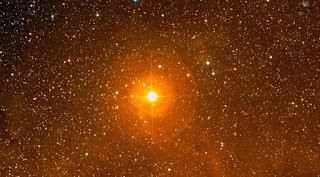 Like all stars of its size Mu is unstable its blowing gas away and has created a huge surrounding shell that is a third of a light year across. It does appear that Mu is large enough to become a supernova in the future.