You would think that one of the best known stars in the sky would be completely understood. Think again. The most famous of double stars is Ursa Major’s naked eye pair Mizar and Alcor the only double for which each member has a name. Mizar has a magnitude of 2.0 while Alcor has a magnitude of 4.0. 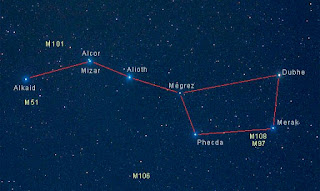 It is said that the Arab astronomers of 1,000 years ago used the Mizar/Alcor system as a way of testing people’s eyesight. Haze in the sky can it make it difficult to see Alcor.