The first known variable star Omicron Ceti or Mira which means the Wonderful. It was discovered by the Dutch astronomer David Fabricius who incidently was a friend of Tycho Brahe the last great pre telescopic astronomer in 1596, he saw it as star of the 3rd magnitude. It then disappeared and was seen a few weeks later. Then in 1603 Johannes Bayer who gave the 24 brightest stars of each constellation a letter from the Greek alphabet staring with the brightest being alpha then beta down finally to omega. Bayer saw it as 3rd magnitude stars and allocated the it the letter omicron. Shortly afterwards it disappeared again. 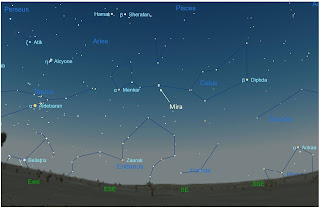 Astronomers then noted that Mira returned to its brightest every 331 days and varied in brightness from magnitude 2 when it can easily been with the naked eye down to magnitude 10 when a small telescope is needed to see it. Mira lies at a distance of about 300 light years and is a red giant with a spectral class of M7.

Mira is the prototype of a very large class of red giant variable stars, the Mira type variables. These stars pulsate over semi regular period of time, they are approaching the last phase of their lives. Eventually Mira will loose all its gases into space and will become a planetary nebula. When the star passes through that stage all that will be left will be the core of the star which will be a white dwarf. This is what eventually will happen to our Sun.