Little in the sky is more attractive than the delightful seven sisters or Pleiades in the constellation of Taurus the Bull. Its an open cluster, 7 stars in order of brightness are Alcyone, Electra, Maia, Merope, Taygeta, Caleno and Sterope. They are named after the daughters of the god atlas and the mortal Pleione. Only Alcyione has a Greek letter and that is eta. All the seven sisters have Flamsteed number Merope is 23 Flamsteed. 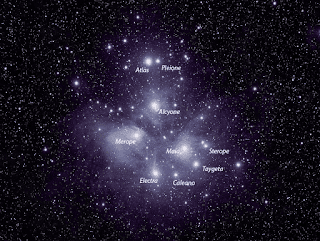 Although there is nebulosity all around the Pleiades Merope is enmeshed in a cloud of dusty gas, the stars in the Pleiades are not hotter enough to ionize the gas and make it glow. Instead the tiny dust grains embedded in the cloud scatter and reflect the starlight to make the Pleiades Reflection Nebula. The reflection nebula is at its best around Merope. 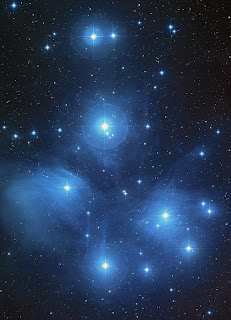 Merope and the other Pleiades which form this open cluster are young star being at most only around 100 million years old, and lie at a distance of around 400 light years. The Pleiades are also known as Messier or M45.