Delta Ursa Majoris or Megrez which means the base of the bear’s tail is the faintest of the stars that make up the part of Ursa Major that is referred to as The Plough. Its probably the one group of stars that is most easily recognised even by non astronomers. Megrez lies at a distance of 80 light years and is an A3 class star with a magnitude of 3.1. 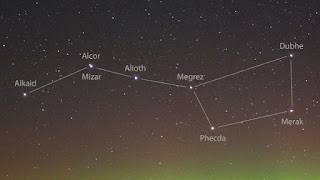 There are however some mysteries connected with Megrez astronomers in ancient Greece ranked it as the same brightness as the other stars in the Plough, which clearly it is not now. Either the astronomers of 2,000 years ago were wrong or something else is going on.

Over the past 40 years or so I have seen Megrez change in brightness by over a magnitude. It is possible that Megrez is one of what astronomers call a secular variable star. This is a star that changes in brightness over a very long period of time.

The next time you look at the Plough make a note of how bright Megrez appears and then do it again in a few months time.