Kapteyn’s Star a class M1 red sub dwarf lies at a distance of only 12.76 light years in the constellation of Pictor the Easel. Due to its closeness it moves across the sky at a very speedy 8.7 seconds of arc per year. Kapteyn’s Star is second only to Barnard’s Star for its speed across the sky. It is presently headed southwards towards the constellation of Dorado the Goldfish It was named after the prominent Dutch astronomer J C Kapteyn (1851-1922). 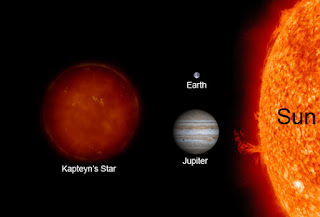 The star came within just 7 light years of the Sun 10,800 years ago and has been moving away ever since. Kapteyn’s Star shines with a magnitude of 8.8 meaning its just visible in binoculars. Its surface temperature is 3,500 degrees, much cooler than our Sun. 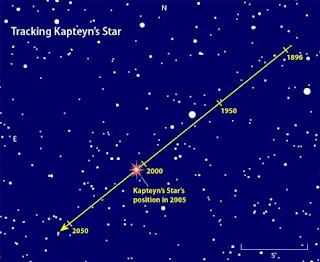 In 2014 it was announced that Kapteyn’s Star plays host to two planets, one of them is considered to be the oldest possible habitable planet with an age of around 11 billion years. The possibility of life on either one must be considered low as most red dwarf stars produce very powerful solar flares.