Like opposing hands of a clock the Plough and the letter ‘W’ of Cassiopeia wheel about the North Star. Both can be seen all year round from Britain meaning they are both circumpolar., They never set and are visible in the sky throughout the year.

The letter ‘W’ of Cassiopeia is formed from five stars. Beginning at the western end, or the right hand end, we see the star Beta whose proper name is Caph which means ‘palm’. Next comes alpha or Shedar which means ‘breast’, gamma which has no name marks the middle star, then comes delta whose name is Ruchbah, which means ‘knee’ and finally epsilon, which again has no name and is quite noticeably the faintest of the five stars. 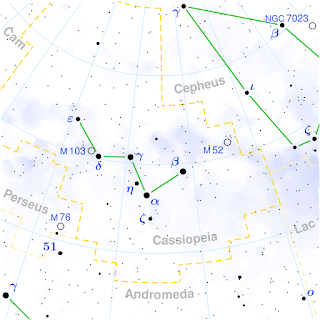 Probably the most interesting of the stars of the ‘W’ of Cassiopeia is gamma, the middle star, which is one of the brightest stars to have no proper name. Gamma is a star that sometimes changes in brightness. Stars that do this are called variable stars. It is a rare type of variable star, it varies between magnitude 1.6 to magnitude 3.0 and is the prototype star for the small group of Gamma Cassiopeia type variables. It lies at a distance of 550 light years. These are massive B0 class stars with temperatures of around 25,000 degrees. 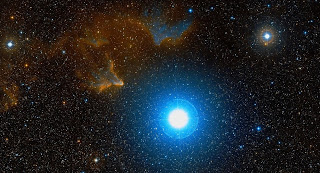 This changed the appearance of Cassiopeia considerably. It is therefore well worth keeping an eye on gamma as it is very capable of springing a surprise on us.