An interesting star 83 Ursa Majoris is a star that I have watched for over 40 years, it normally shines at magnitude 4.6 and lies at a distance of around 520 light years. Its a red giant star with a spectral class of M2 with a surface temperature of 3,600 degrees much cooler than the Sun. 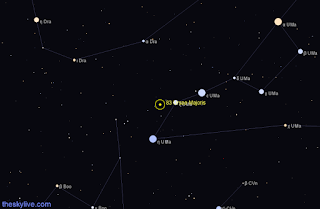 83 Uma is officially listed as a semi regular star with a magnitude varying between 4.6 to 4.7. I have seen it beyond those limits, however on August 6th 1868 the Irish astronomer John Birmingham saw the star rise to magnitude 3.3, the following night it had returned to its usual magnitude 4.6.

It is a star that is certainly worth while having a look at if at any time you happen to be looking at the handle of the Plough.