The southern most of the first magnitude stars that can be seen from Britain, if you can locate the Square of Pegasus which can be found in the autumn sky and then use the two right hand stars of the square, draw a line downwards and you will reach Fomalhaut, which is the brightest star in the rather obscure constellation of Piscis Austrinus the Southern Fish. The constellation can be best seen from the southern hemisphere. 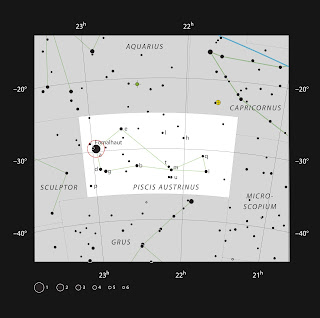 Fomalhaut shines with a brightness of 1.2 and lies at a distance of 25 light years. It is an A3 class star meaning that it is hotter than our Sun. It is not a single star but a triple system, Fomalhaut B is a variable star TW Piscis Austrini which is a red dwarf star lying nearly 1 light years away, while Fomalhaut C or LP 876- 10 which was catalogued by the Dutch American astronomer Willem Luyten is another red dwarf lying around 2.5 light years from Fomalhaut. 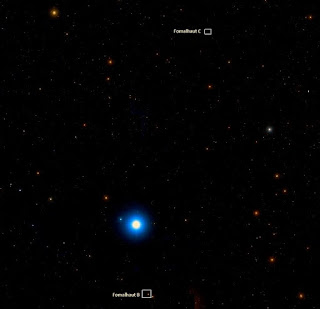 It should have been one of the four royal stars, together with, Aldebaran, Antares and Regulus, since 4,000 years ago it almost marked the winter solstice; but, as its position was well south of the celestial equator it was replaced by the more accessible Altair.