Most stars do not change over a human lifetime. Though they may vary they do not fundamentally alter their natures. To learn how stars age we use theory to string the various kinds together. It is therefore interesting to see a star transform itself as we watch. Such a star is FR Sagittae.

FG Sagittae lies at a distance of around 4,000 light years away in the small constellation of Sagitta the Arrow. When first recorded in 1896 it was the centre of the planetary nebula Henize 1-5. It appeared blue and had a magnitude of 13.6. It slowly brightened until in 1969 it was brighter by 4 magnitudes and in 1991 it was at magnitude 9.0. 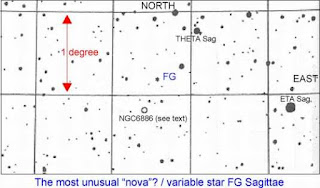 As the central star of a planetary nebula FG Sagittae was once a huge red giant star like the Mira type variable stars.

In 1992 the star suddenly faded by nearly 5 magnitudes then recovered to around magnitude 10. FG Sagittae is losing carbon rich matter that condenses into carbon dust which will hide the star until the soot dissipates. Interestingly this is what happens to a small group of variable stars, the R Corona Borealis stars.

R Corona Borealis was discovered in 1795 by Edwarde Piggot while living in the city of Bath. Piggot has worked with the death astronomer John Goodricke in York from 1781-1786

Astronomers have wondered for decades where these weird R Corona Borealis stars came from, maybe FG Sagittae is giving us the answer.