Epsilon Eridani in the constellation of Eridanus the River is one of the closest Sun type stars that some astronomer think may have a planet orbiting it. Epsilon is cooler than the sun with a surface temperature of around 5,000 degrees compared to the 5,800 degrees for the Sun. It lies at a distance of 10.5 light years away. 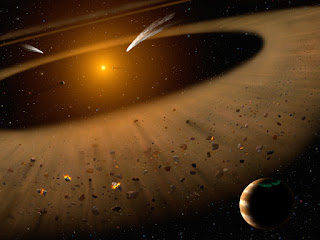 As it is so near to us relatively speaking it has been the target for the SETI project this was the Search for Extra Terrestrial Intelligence. As yet there has been no response from any aliens on any planet orbiting the star assuming there were any aliens there of course.

There is still a big debate going on between astronomers as to whether there is even a planet orbiting the star, in 2000 astronomers announced that an object had been discovered but today astronomers are not to sure.