When not posting historical information I am often found making naked eye observations of the night sky. Starting last century I have spent many years using 15x70 binoculars looking for high latitude novae. These are novae that occur between 3-4 kpc above or below the galactic plane. However I have been pushed by some of my friends to enter the 21st century and at least take some photographs. I must stress that I am a non expert when it comes to photography as you will see from the example with this blog.

I have recently been checking the area between Ursa Major, Lynx and Camelopardalis which I know appear quite barren, they are among the areas that don’t attract much attention. I should point out that in the many years of observing I have come close to but have yet to discover a nova.

I consider myself a techno pagan so this was a big step, I have just purchased a second hand skywatcher tracker and a Fuji X-T2 camera, although I think I got the wrong lens because I got a 135 mm with a small field of view when a wider field would have been more useful. I will have to rectify this.

My first pictures which I took on 17.09.2020 will not win any competitions but they are not intended to. What they allow me to do is to look for novae or notice variable stars that are behaving out of their normal behaviour. I check my photos as I would check my visual work by using Sky Map Pro 12 which I find is rather good, I find going down to magnitude 9.0 is perfectly adequate for me. 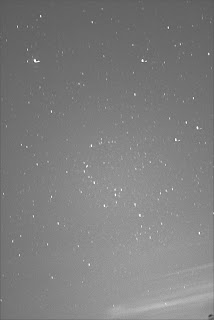 I have shown an example of my first photographs of the Kids, I was using Capella as a target, the tracking still has to be worked on! I cannot resist mentioning that while trying to photograph the area around beta Ursa Minoris or Kochab I completely missed and ended up photographing the area around kappa Draconis which is equally interesting.