On August 31st 1902 Charles Perrine at the Lick Observatory in America discovered a comet, this was Comet b 1902 Perrine. It was discovered in the constellation of Perseus. 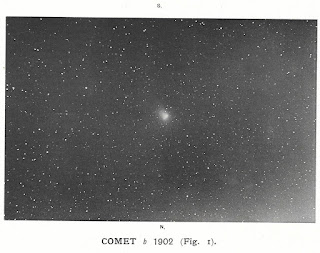 The comet was photographed by Isaac Roberts using his 5 inch Cooke telescope. Roberts made a series of 5 photographs of the comet between September 6th and October 10th. This is an example of one of those photographs.

Isaac Roberts began his astronomical career in 1878 at Rock Ferry on the Wirral Peninsular using a 7 inch Cooke telescope, in 1882 he moved to Maghul near Liverpool and in 1890 he moved to Crowborough in East Sussex where he observed comet Perrine.