Epsilon Auriga is a noted eclipsing binary, it is the star that forms the apex of the small triangle of stars that form the Kids just below Capella the brightest star in Auriga. Capella is known as the She Goat Star so wherever Capella goes the kids will always follow. 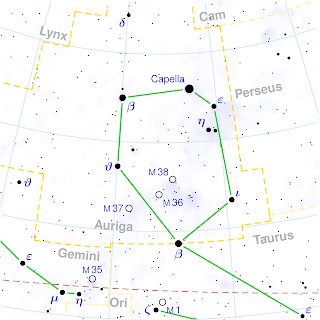 Epsilon or to give its proper name Almaaz which means the ‘Billy Goat’, is a F0 supergiant with a huge companion of some unknown type. The eclipse is massive and about every 27 years Almaaz fades from magnitude 2.9 to 3.8 it stays like this for between 640-730 days.

The first recorded fading of the star was in 1821, however it was only in 1912 that astronomers realised how extraordinary the eclipse is.

The nature of the Almaaz system is still a mystery to astronomers, one suggestions is that the companion star might be an enormous yellow supergiant star. Astronomers are not even sure how far away Almaaz is with estimates from 1,000 to 1,350 light years away.