Cygnus the Swan is one of the most striking of all the constellations. It is often nick named the ‘Northern Cross’. Its 5 main stars are arranged in an X pattern. 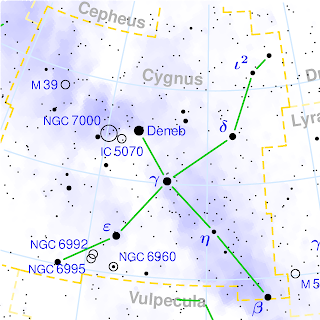 The brightest star in Cygnus is Deneb, which means The Hen’s Tail, and forms with Altair in Aquila and Vega in Lyra the summer triangle of stars. Although appearing to be the faintest of the three stars it is actually the brightest. 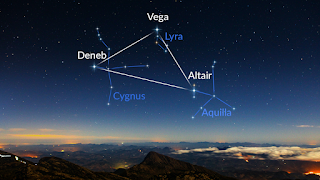 Let me explain although when we look at the summer triangle Vega looks the brightest then Altair and thirdly Deneb. However appearances can often be deceptive, because Vega is 25 light years away while Altair is only 17 light years away but Deneb is a whooping 2,500 light years away. If all three stars were placed on a line the same distance from the Earth then Deneb would massively outshine Altair and Vega. 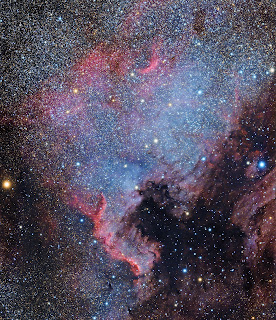 Deneb lies in a rich part of the Milky Way and near it is one of the most interesting nebulas in the northern hemisphere, this is the North American Nebula and it does look like North America and is a favourite with astro photographers. It can just be seen with the naked eye but only as a slightly bright patch in the sky.