This is one of the most famous and important stars in the sky. Delta it has no name and was discovered to be variable by John Goodricke in York in 1784, Goodricke who was deaf and unable to speak was with Edward Piggot one the ‘Fathers of Variable Star Astronomy’. 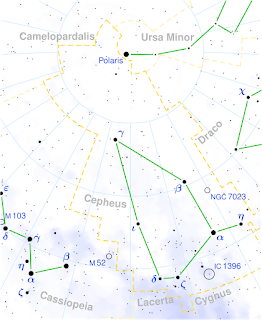 Delta is the prototype for the Cepheid variable stars which astronomers use today to determine how far away galaxies are. There is something called the period luminosity law. A classical Cepheid's luminosity is directly related to its period of variation. The longer the pulsation period, the more luminous the star. This relationship was discovered by Miss Henrietta Leavitt at Harvard in 1912.

An interesting coincidence is that John Goodricke who discovered delta to be variable was deaf and Henrietta Leavitt who explained it was deaf in one ear.

Delta is about 887 light years away, its spectral class varies between F5Ib-G1Ib with a surface temp of around 5,500 to 6,800 degrees as it varies. The magnitude varies between 3.6 and 4.3 every 5 days and 9 hours. There is a companion star with a spectrum of B7-8 giant which orbits every 6 days.