The Crab Nebula is the remnants of a star that destroyed itself in what astronomers call a supernova explosion.

July 5th 1054 dawned peacefully, except that south of Zeta Tauri Chinese sources tell us that a bright star suddenly appeared where none had been before. It shone as brightly as the planet Venus in the sky.

One most interesting fact is that there does not appear to be any records from Europe. One suggestion was that the belief of the church was so strong and that monasteries were the centres of learning and the belief was that the heavens were unchanging so that even if a bright star appeared in the sky it would not have been reported. After about a year the star disappeared from view and nothing was seen of it for about 700 years.

It was in 1731 that the astronomer John Bevis and in 1758 Charles Messier while searching for comets recorded it and in Messier’s case began his catalogue of comet like objects which he drew up to avoid getting confused with real comets. The Crab Nebula became Messier 1 or M1, his list would eventually run to 110 objects. 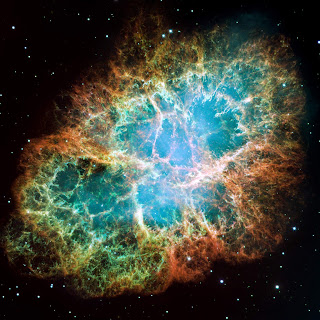 The name Crab Nebula was introduced by Lord Rosse in 1844 while observing it a home made 36 inch reflector from Birr Castle in Ireland. He thought it looked like a crab. Strangely when he observed it again in 1848 he could not see the shape of the crab and yet the name has stuck.

At the centre of the nebula is a small neutron star about 20 miles across spinning at around 30 times a second. The crab nebula is one of the most heavenly studied objects in the galaxy. The nebula is expanding at a rate of around 930 miles per second.

The crab nebula lies at a distance of around 6,500,light years. It cannot be seen with the naked eye and shines with a magnitude of 8.4, which means it can be seen through binoculars.