Alpha Canes Venatici is the brightest star of the hunting dogs that was created by Johannes Hevelius in the 1670s. It is formed of stars that can be found beneath the handle of the Plough or Big Dipper as it is known as in America. 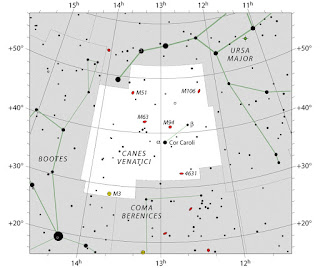 It is a double star lying at a distance of 115 light years. The two components of the star are formed of an A0 and F2 class stars, the A class star is the brighter. Alpha 2 which is the star we see and call Cor Caroli is slightly variable varying between magnitudes 2.8 and 3.0 which can be detected by an experienced variable star observer.

Cor Caroli is a strange magnetic variable star and is made up of elements similar to those of Chi Lupi, It is in fact the prototype star for a whole group of these magnetically variable stars which spread between A and B class stars with Cor Caroli being in the middle.

Although it is beyond the scope of these notes astronomers study these Cor Caroli type variable stars to try to better understand if there is a link between them and white dwarf stars.