The constellation of Lupus the Wolf is squeezed between the constellations of Scorpio and Centaurus. Among its treasures is a modest looking star of magnitude 3.9, this is Chi Lupi which can be found just below the head of the scorpion. 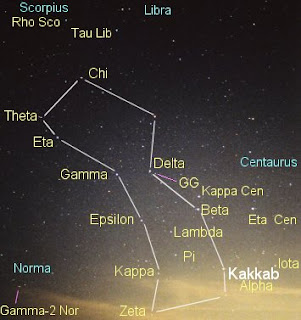 Chi is a double star the two stars cannot be seen without using a spectroscope, they are separated by about 20 million miles and take 15 years to orbit each other. The main star is a B9 class star and its companion is an A2 star. Chi lies at a distance of around 210 light years.

What makes Chi special is that it is made of different stuff to what we would expect to find in most stars. The Sun for an example is an ordinary star and is made up of mostly of light materials such as hydrogen and helium.

With Chi Lupi we find heavier elements such as copper, zinc and mercury more abundant than astronomers find in other stars. At the present time sstronomers do not know why.

They are often referred to as metallic stars. Not because they are made of metal the star is too hot for the elements to exist in a solid state but because of the large amount of metallic materials in these stars.