While some stars that make major parts of a constellation simply vary in brightness for example Algol in Perseus some just disappear for periods of time. Mira or omicron ceti is the most famous example of these stars but another Mira type star Chi Cygni in the constellation of Cygnus the swan is just fascinating. 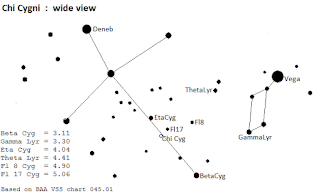 If you can locate Deneb which is one of the three stars that make up the summer triangle of stars and draw a line down you will come across the star gamma and continuing this line you will reach beta or Albireo a splendid double star. About two thirds the distance from gamma to beta you will find chi.

Mira type variable stars are huge stars which typically if placed where the Sun is would fill the solar system out to the orbit of Mars, These are star that are dying, they will throw off their shell of gas to leave a planetary nebula, these nebula were so named because when astronomers first saw them through telescopes they looked like planets. These planetary nebula will eventually push all their gas into space leaving just a small white dwarf star. This is the ultimate fate of our own Sun.

When it comes to Miras chi Cygni is among the mote extreme examples of this class of star. When at its brightest is can be seen as a star of magnitude 3.3 making it easily visible to the naked eye. It can however fall in brightness down to magnitude 14.2 which is around 15,000 times fainter than when at its brightest. This period for light changes takes 408 days much longer than the usual 300 or so days for most Mira to take. Mira Ceti itself takes 331 days. Chi lies at a distance of about 590 light years,

But these statistics are not what make Chi Cygni special, it happens to be one of the coolest red giants with temperatures ranging from 2,200 degrees and 2,500 degrees. It is part of a rare group of stars that have a spectral class of S. Chi itself is a S6 class star.