One of the most famous and most interesting stars in the sky. It is ranked as the 10th brightest star in the sky, but although being labelled as alpha it is usually slightly below beta or Rigel in brightness. It is a variable star normally varying between 0.3 to 0.8, its a semi regular variable star with a variable period of between 400- 1,000 days. However during during 2019 and 2020 it became much fainter than normal and caused astronomers many headaches. 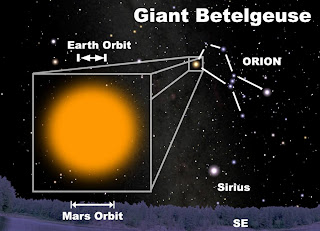 Betelgeux which is sometimes pronounced as quite unofficially as Beetlejuice, its name is Arabic and means the ‘Shoulder of the Central One’ and is a red supergiant star. In fact it is so big that if it was placed where our Sun is all the planets out to Jupiter would be inside the star, Betelgeux lies at a distance of about 700 light years. As it is very large and close to us astronomers can actually see a disk rather than just a dot. It is one of the largest stars that can be seen with the naked eye. 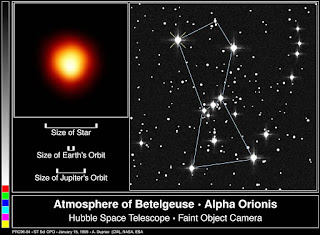 Betlegeux will become a supernova within the next million years which astronomically speaking is a very short period of time and as I mentioned earlier in 2019/20 it became very faint and fell to magnitude 1.7 well outside its usual range, and many astronomers believed it is was to go into its supernova phase and blow up and destroy itself. It took some expert astronomers some time to consult historical records which showed that this had it had faded in brightness back in 1927 and 1941. 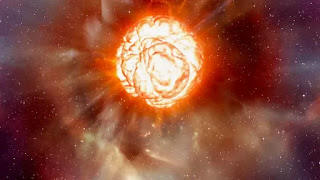 Astronomers now think they understand what caused Betelgeux to become more fainter than normal, using the Hubble Space Telescope they saw a large amount of dense hot gas moving out from the star. This gas then may have cooled down and formed a dust cloud that partially blocked the light from Betelgeux reaching the Earth.

Betelgeux will become a supernova at some point in the future and you can be quite sure that astronomers with regards to what has just happened will be paying even more attention to this old red supergiant than they would normally do.