I have come across details of a Cooke telescope which was purchased by Benjamin Dennison Naylor of Manchester in 1863 it was a 6 inch Cooke, I then came across a note from a Miss Naylor of Altrincham in 1869, following the death of Benjamin Naylor. I am not sure what relation she was to Benjamin but she was advertising a very fine equatorial by Cooke, almost new, 6 inch aperture with clockwork movement, eyepieces and finder. 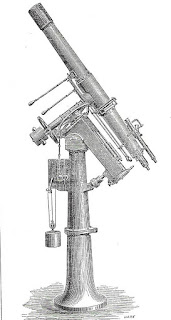 Benjamin Naylor died at his residence at the Knoll near Altrincham on December 27th 1868, he was the last lineal male descendant of four of the clergy ejected from their livings by the act of Uniformity in 1662. He was a governor of Chetham’s Hospital and Library.

I do not know who brought this telescope following the death of Benjamin Naylor, maybe someone in the Manchester area is familiar with this astronomer and might know the answer.