The transit of Mercury was observed on November 14th 1907 from the Royal Alfred Observatory in Mauritius using a Cooke 6inch refractor. The transit which was seen through a cloudy sky and the limb of the Sun was described as being boiling. Mercury appeared as a clear cut black disc, perfectly circular with no spot or fringe. 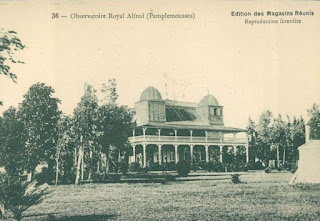 There were 11 photographs taken during the transit with the 6 inch Cooke which had been supplied to Mauritius by the colonial government in1874 in order to observe the transit of Venus.