The Vulcan Star seen from Australia

Dr. William Evan MacFarlane was born on the island of New Caledonia which is located in the Pacific Ocean between Australia and Fiji. He was born in 1866 the son of a missionary.

He was educated in England and entered the medical profession and after first practising in Edinburgh moved to China. However due to civil unrest and then the war with Japan MacFarlane returned to England. He then served with the British army during the Boer war as a medical officer.

In 1903 he obtained the appointment as Government Medical Officer to a large mining district in North Queensland, Australia where he remained to his death. Outside his medical career he was very keen on astronomy.

He took charge of the Walsh Hospital at Irvinebank, North Queensland in 1906 where he also installed on Hospital Hill an observatory which housed a Thomas Cooke of York 7in telescope. 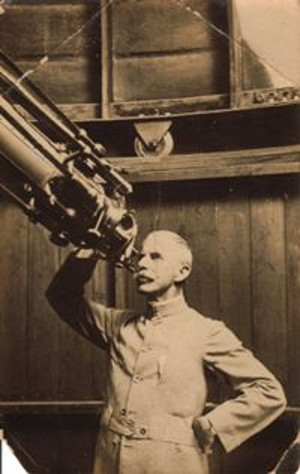 He observed Nova Aquila 1918 which he named ‘The Vulcan Star’, which the nova is still known locally as. This was probably named after The Vulcan Mine, a tin mine adjacent to his home and observatory.

He died on August 18th 1919 from influenza, he never married. It was reported in the Cairns Post that the funeral of William MacFarlane was the largest and most impressive ever seen in Irvinbank with 200 mourners.