The third brightest star in the sky, with a magnitude of -0.3 and one of the pointers towards the Southern Cross. The brightness of the star is due to its closeness to us. Alpha is only 4.3 light years away. It appears as a single star but in fact it is a triple star system. The third and faintest star in the system is also the closest to the Earth. This is Proxima Centauri which is only 4.2 light years away. 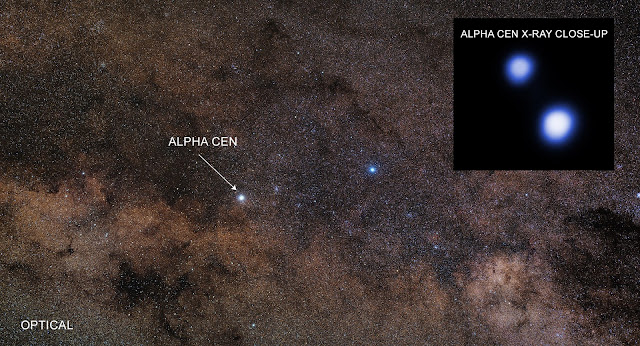 Alpha does not seem to have an official name although it is sometimes called Rigel Kentarus or Hadar, this name is sometimes also used for beta Centaurus. In my 100 great star list I have used the name Agena for beta to hopefully avoid any confusion.

The distance to alpha was determined in 1839 by Thomas Henderson while working at the Cape Observatory in South Africa. Alpha is not visible from Britain.

Henderson used what is called the principle of the parallax to work out how far away the star is. Let me give you an example. Close one eye and hold up a finger at arm’s length and line it up with an object in the background, such as a tree. Now without moving your finger or your head use the other eye. Your finger will no longer lined up withy the tree, because you are observing it from a slightly different location, your two eyes are not in the same place. If you know the length of the baseline (i.e. the distance between your eyes) and you measure the angular shift of your finger, which defines the parallax, you can solve the triangle by means of simple mathematics. Then it is possible to find the real distance between your finger and your face. I am talking of course about very simple trigonometry which everyone would study while at school. 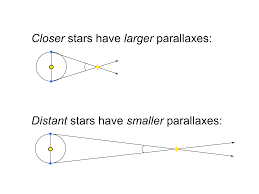 Proxima the closest star to us and the third and faintest component of the system was discovered by R T A Innes from South Africa in 1915. 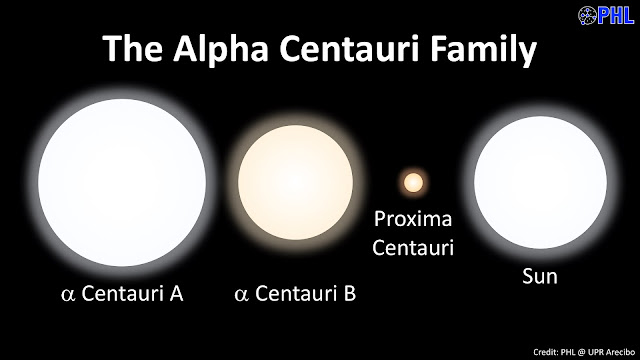 The three stars that form alpha Centauri are alpha A which is a G2 class star with alpha B being a K1 class star. Alpha C or proxima is a small red dwarf star which appears to have at least two planets orbiting it.